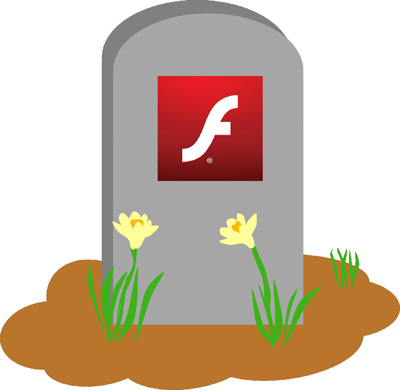 A number of videos you see on the Internet are in Flash format. YouTube used Flash for their videos as standard for a long time, but this has been changed in favour of using html5 as the default player. You may remember that if you used iphones and ipads you couldn't watch your favourite cat video on YouTube. Apple never really liked Flash and didn't support it as it takes a long time to load compared to newer technologies and is vulnerable to cyber-attacks.

No doubt partly because of Apple's stand, Flash is finally being killed off. Adobe is intending to stop updating or distributing Flash player by the end of 2020.

You will have noticed that it is already harder to display Flash content in web browsers. You may have tried to view Flash content but instead of it running automatically you have been asked to click a button to enable it.

Recent updates to Chrome have gone further than this and may not include the enable Flash button at all when you visit a webpage which includes Flash content.

Flash is becoming less and less common and this is what Google has to say about it:

For 20 years, Flash has helped shape the way that you play games, watch videos and run applications on the web. But over the last few years, Flash has become less common. Three years ago, 80 percent of desktop Chrome users visited a site with Flash each day. Today usage is only 17 percent and continues to decline.

Firefox has published a Roadmap for Flash End-of-Life indicating that Flash will be disabled for most users by default in 2019.

Internet Explorer's End of an Era article tells a similar story with Microsoft removing flash from windows by 2020.

Most website developers are creating multimedia without having to use Flash so the chances are you won't even notice the change a lot of the time. What's more you won't be constantly pestered to update Flash because yours is out of date!

Sometimes e-learning is delivered via SCORM content as it is supported by a lot of Learning Management Systems. Older SCORM courses were traditionally published as Flash only. As a result, they've never run on iPhones, iPods or iPads. Most popular authoring tools, including Articulate and Captivate, now tackle the problem by providing an HTML5 output option. Authors should ensure they select/include HTML5 output when publishing their content.

See how easy online learning can be with a free trial

Training Tracker is a tradename of The Multimedia Design Studio Limited